It is so strange to me that I get to witness another human being’s first time ever eating stuff. We like food over here, as evidenced by our garden (and our restaurant/takeout bill – up until last month when we decided we really needed to cut it out if we are going to be able to survive on one income). I was really hoping Willem would like food, too. General consensus? Does he ever. 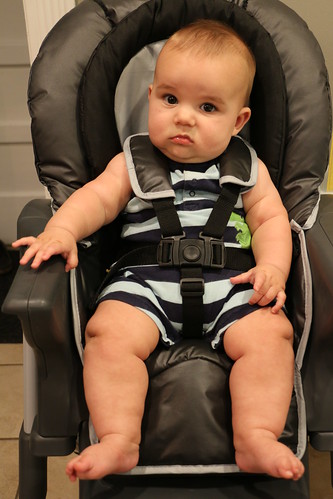 No, really. I swear he likes food. This is just his well-honed Elvis impression.

Like, yesterday? Willem ate PEAS for the first time. Ever. In his life. And he was all, “Hey, it’s no big thing, I’m just eating PEAS. For the first time. Which, by the way, are REALLY GOOD, and CAN I PLEASE HAVE SOME MORE? Right MEOW?” 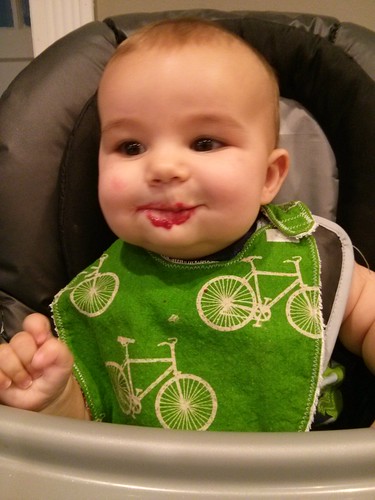 Beets are also a serious fave.

It’s also kind of amazing watching his little brain work. He’s at the stage where, if you put a Cheerio or overcooked piece of broccoli or green bean in front of him, he gets laser sharp focus on whatever is on that tray. First he rakes it into his fist. If he gets a good grip on it and part of it is sticking out (on the mouth side, that is), he’s in business. If not, he sucks on his hand, shoving as much of it in as he can in hopes of getting that little food morsel out. If not? Well, he drops it back on the tray and starts all over again. Baby development = super cool to see. 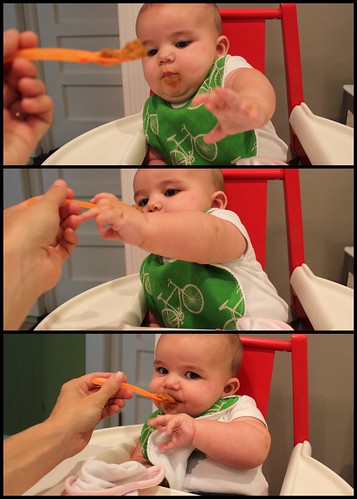 SO WHAT’S ON THE MENU? This is mostly for my own reference (and for times when I will inevitably feel uninspired re: Willem snacks and need a reminder of some faves), but here are just a few things our little guy has inhaled. We haven’t had to buy baby food yet – just made this stuff from fresh and frozen produce:

So we’ve got eating down. Now if we could just figure out how to not end up with sweet potato or spinach up our nose and down our sleeves.